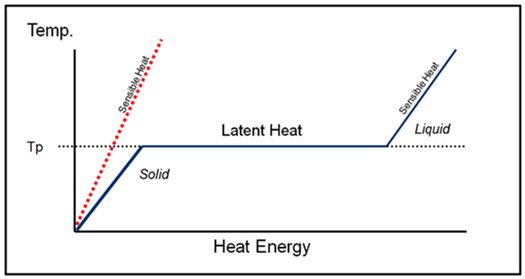 PCMs absorb and release thermal energy as they transition between solid and liquid states i.e. melting and freezing or crystallisation. (Transitions such as liquid-vapour-liquid also involve large thermal energy changes and are used in e.g. refrigeration circuits where vapour can be controlled.)

The key to how they work is the phase change. The chart above illustrates (in an idealised way) the relationship between temperature and stored thermal energy for a solid-liquid PCM (blue line) and a standard material that does not go through a phase change (red dotted line).

Other types of heat storage materials such as water or concrete do not melt and freeze under normal conditions. These materials store heat with a change in kinetic energy and therefore temperature.  The heat stored is known as “sensible heat” and is quantified by the material’s specific heat capacity, mass and change in temperature.   Water is an effective sensible heat storage material due to its relatively high specific heat capacity and concrete can also be effective due to its high density, but both must change temperature to store/release thermal energy.

PCM (blue line) has a characteristic phase change plateau as heat is absorbed or released during melting or freezing.   The phase change temperature (Tp) is a property of the PCM being used and is steady during the phase transition even though heat energy is being absorbed or released.   The thermal energy absorbed during solid-liquid phase change is known as the latent heat of fusion – the term “latent heat” stems from the observation that the stored heat energy seems to be unrelated to the temperature and is hidden.  PCMs are therefore also referred to as latent heat storage materials.

Where they are used passively, PCMs work to buffer the temperature of the immediate surroundings towards the phase change temperature, as heat is absorbed or released by the PCM.  As such, PCMs can be used for passive temperature regulation or thermal protection and can eliminate or reduce the need for powered cooling or heating.  The heat absorbing/releasing ability (power) of the PCM depends on the properties of the PCM, the form in which it used and how it is used (considering conductive, convective and radiative heat transfer mechanisms).